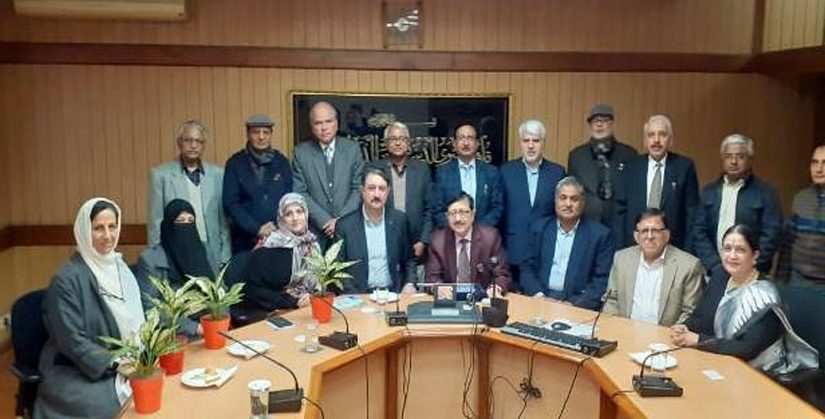 During their visit to India to take part in the Raisina Dialogue Conference, ATU officials had visits to three Indian universities and negotiated on the expansion of academic ties with these institutes.

In January 2020, ATU President and Director of International Academic Cooperation had visits to three Indian universities and negotiated on the expansion of academic ties with these institutes.

Following the invitation made by the Observer Research Foundation (ORF), affiliated to the Indian Ministry of External Affairs, to participate in the annual forum of top representatives from various countries, known as the Raisina Dialogue 2020, Professor Hossein Salimi, ATU President delivered a speech in the annual trilateral conference of India-Iran-Russia.
Thanks to the efforts made by the Iranian Embassy in India, Professor Salimi and Dr Tishehyar, Director of International Academic Cooperation had visits to three Indian universities.

In their visit to University of Jamia Millia Islamia (JMI), ATU representatives agreed on donating books by ATU to the JMI to complement its library. Moreover, the parties negotiated on sending lecturers from ATU to teach Persian Language and Literature in the JMI Department of Persian. ATU and JMI officials then discussed the possibility of exchanging faculty and students in various subject areas and ATU expressed its willingness to accept mobility students in the field of Iranian Studies.

In the visit to the Jawaharlal Nehru University, then, the presidents of the two universities negotiated on the establishment of two research centres in India and Iran to develop Iranian and Indian Studies.

In the final section of this travel, various Faculties in the Jamia Hamdard (JH) hosted ATU representatives. The two universities then agreed on supporting the collaborations between lecturers from the two institutes in the areas of Islamic Studies, Management, and Law. The Cultural Attaché at the Iranian Embassy in India then expressed the Embassy"s interest in supporting the annual holding of conferences by ATU and the JH in the two countries.

ATU had formerly signed MoUs with the three parties on academic cooperation, and the parties had the opportunity to extend their MoUs during this visit.

The Raisina Dialogue is a multilateral conference committed to addressing the most challenging issues facing the global community. Every year, global leaders in policy, business, media and civil society are hosted in New Delhi to discuss cooperation on a wide range of pertinent international policy matters. The 2020 round of the conference was held from 14 to 16 January 2020.

Agreement signed with University of Padua

International Conference on Millennium of Khayyam held in Madrid

International session to be held in the ECO College

International session on the Silk Roads held in the ECOI