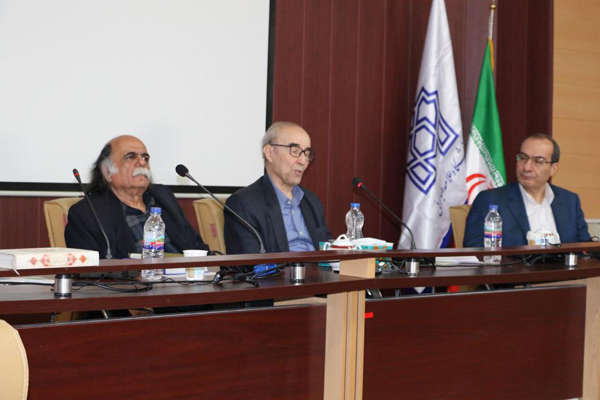 In a ceremony organised by ATU Centre for Research in Translation Studies and Departments of Persian Language and Literature and French Language, the great linguist and Iranologist, Gilbert Lazard was commemorated.

At the beginning, Dr Shamisa referred to Lazard’s considerable attention to poetic metre in pre-Islamic Iran, and concluded that, in their analyses of the metre of Middle / Pahlavi Persian poetry, none of the Iranologists, including Lazard, studied the metre of Dari Persian poetry; they have mainly introduced it as a syllabic poetry with “stress” having the key role. He added that Iranian literary scholars, like Mohammad Taghi Bahar, did also follow the same route, and concluded that Pahlavi Persian poetry is a prosodic poetry.

Dr Mir Jalaleddin Kazzazi then reviewed the Iranian Studies by French researchers, and talked about their role and importance in Iranian Studies. Kazzazi named France as “the first Iranian Studies database”. This knowledge and activity further expanded into other countries and led to the establishment of several departments and institutes named “Iranian Studies” in their universities. Dr Kazzazi closed his lecture with analysis of a few examples from Lazard’s translations of Khayyam"s Rubayiat.

Afterwards, Dr Aliashraf Sadeghi reviewed the important works produced by Lazard in the field of Iranian Studies and Persian Language. Then Dr Tabibzadeh delivered a speech entitled "Investigating the Origin of Ruba’I Metre from Lazard’s Viewpoint," briefly introducing all types of metre and analyzing Lazard’s paper on the origin of Ruba’i and its evolution.

In the French section of the ceremony, Dr Tehrani introduced Lazard"s works in the fields of linguistics, descriptive grammar, general linguistics and typology of Persian Language, and pointed to the importance of the works of Lazard in the evolution of Persian language and Persian Studies.

Dr Fatemeh Azimifar then presented a linguistic analysis of Acfama, a volume by Lazard, and discussed his valuable views in the field of linguistics and his studies in various Persian Language dialects. Dr Ziar then analysed Lazard"s translation of Khayyam"s Rubaiyat and maintained that he has succeeded both in translating the contents of the Rubaiyat and reproducing its formal, aesthetic features in French.

At the end of the event, Dr Shairi elaborated on Lazard"s linguistic viewpoints and the future of linguistics in Iran and France. He pointed to the efforts made by great French linguists to approach language scientifically, and provided Lazard’s name as a language scholar possessing a considerable discourse in the field.